Most of these dogs in these images, all but two of the pups behind the fence, have experienced many activities. Those activities include trail sledding, backpacking, winter mountaineering including overnight storms, multiple summits, some basic weight-pulling, all for fun.

As sled dogs, with proper training, mals can pull a sledge load between 25-75 miles per day depending on weather and the condition of the trail. The colder the weather usually means the faster and farther they will run, to a certain extent. Plainly put, they love it when its ICE-cold. Their limitations are well below -30F into 40mph+ blizzard force stormy weather. They simply love to run in the cold, and love to do something exhilarating with the team, as a team. However, much preparation must be given to expect them to perform like athletes when exposed to these kinds of conditions. Like any athlete, its not wise to expose them to these kinds of extremes without acclimating them.

These dogs have been the choice for reliable Arctic travel for millennia. To be able to team-run gives them such a feeling of joy that the only explanation of motive could be the reward of experiencing real freedom, instinctual exploration, and pure bliss. They also know that warm food, water, and 8 hours rest would usually lie at the end of the course, which may also help seal the motivation.

When its time to "take them dogs for a run", you always have an animal that loves to do it just for the challenge, the sake of exploring new territory, and loves nothing more than to get you to spend some time with them in their element. Oh, and did I mention, they love to run? 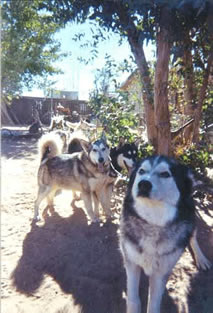 This is Rajah and the team, patiently anticipating the run that he is about to lead. He was a proud and trusting malamute, and you can see some of his nature here by the expression on his face ("down for the job, eager to get to business").

Don't be fooled by the gentle appearance of these friendly furballs. They love to go. Got Dirt, Snow, or Gravel? We'll dig, we'll travel!

The rest of the team is paired up behind Rajah and are showing some good hearted happy spirits that are ready to hike and steady the course. Notice the smiles on Timbre's and Nikita's face, and you can see Aly's ears back indicating she's grinning too, and Kobuk's tail is wagging wide, as he goes pure nuts during these moments just before a run and just can't wait to hit the trail.

Rajah's job is heavy, but he is a veteran trailbreaker. He wouldn't have it any other way. Actually when another leader is placed in front, they run too fast for him and he gets discouraged, he knows how to keep a good pace, he's a born leader. Rajah knows how to find the trail, proceed only when safe, lead an entire group of family lives along any given or chosen path to any given destination, ever so-heartedly guiding you, leading and showing the way swiftly efficient, most importantly keeping bearing and orientation no matter how far a detour takes you off your course. He also knows when to stop if approaching a frozen lake. These smart dogs will not cross these frozen lakes unless living in a very very northerly latitude, and only during the right season. Of course they can be trained to brute-force their way across any frozen lake, but this is unwise training, and undermines the dogs natural abilities.

Rajah knows he is tied out in lead position for a run. He used to lead 7 of his team mates on training runs. Rajah wasn't doing it for the speed like some of the younger dogs, he kept the whole team at a good smooth trotting pace. He didn't like to be bothered by his team mates when working, so he wouldn't hesitate to snap at, and bite into, if given the chance if they tried tangling him up or kissing up to him for play during runs. This taught them that it wasn't time to be goofing off, or wasting energy. Rajah fulfilled his lead position well by keeping the team at his rear 'WELL disciplined', paced, and in good RESPECTFUL order. He was also extremely well at letting ME know when he was getting a bit tired, he would just start snapping at the dogs behind him when he was being pushed or frustrated, then I knew he was feeling stressed so we would pull over for a good long rest.

One cousins of the Malamute that I would like to eventually have as a team member is the North Easterly Hauling Laika. It would be very nice to have a team of this breed. This particular Laika breed has had all the hunting bred out of it, and is a full draft dog, as compared to the malamute and husky who is only half draft and half hunter. What this Laikas breed temperament relates to is a sled dog that wont be tempted to veer off the trail after a rabbit while shooting down a mountain slope at 12mph pulling 1000-2000lbs of dogs and sled behind it. A True companion draft dog, N.E.'ly Hauling Laika's are tall and look sort of between an Akita's colorations and height, maybe a bit taller, with more of a Malamute-ish face, mostly white with black colorations with some uneven big splotches or spots across the face and body. This dog has quite nice and beautiful colorations. This breed is very hard to find as well, mainly because they are primarily located in Siberia and Russia. Good luck on your searches and Nordic Breed Hunts.

Tip; DO not use a pack on a dog when you run it. Packs are made for hiking on foot, or walking.

Tip; Do not use these types of dogs to pull you on skates or a skateboard, it is extremely dangerous. They are too strong, and will not stop. Unless you have something bigger and heavier with brakes, you will not be able to get them to slow down. I personally have had a hospital visit due this.

Most of these dogs in these images, all but two of the pups behind the fence, have experienced many activities. Those activities include trail sledding, backpacking, winter mountaineering including overnight storms, multiple summits, some basic weight-pulling, all for fun.

This work by Brian Lamb is licensed under a Creative Commons Attribution-NonCommercial-NoDerivs 3.0 Unported License.
Based on a work at bleedingedgewebsites.com.